The question to ask in 2020: Who do we want to parent us? END_OF_DOCUMENT_TOKEN_TO_BE_REPLACED 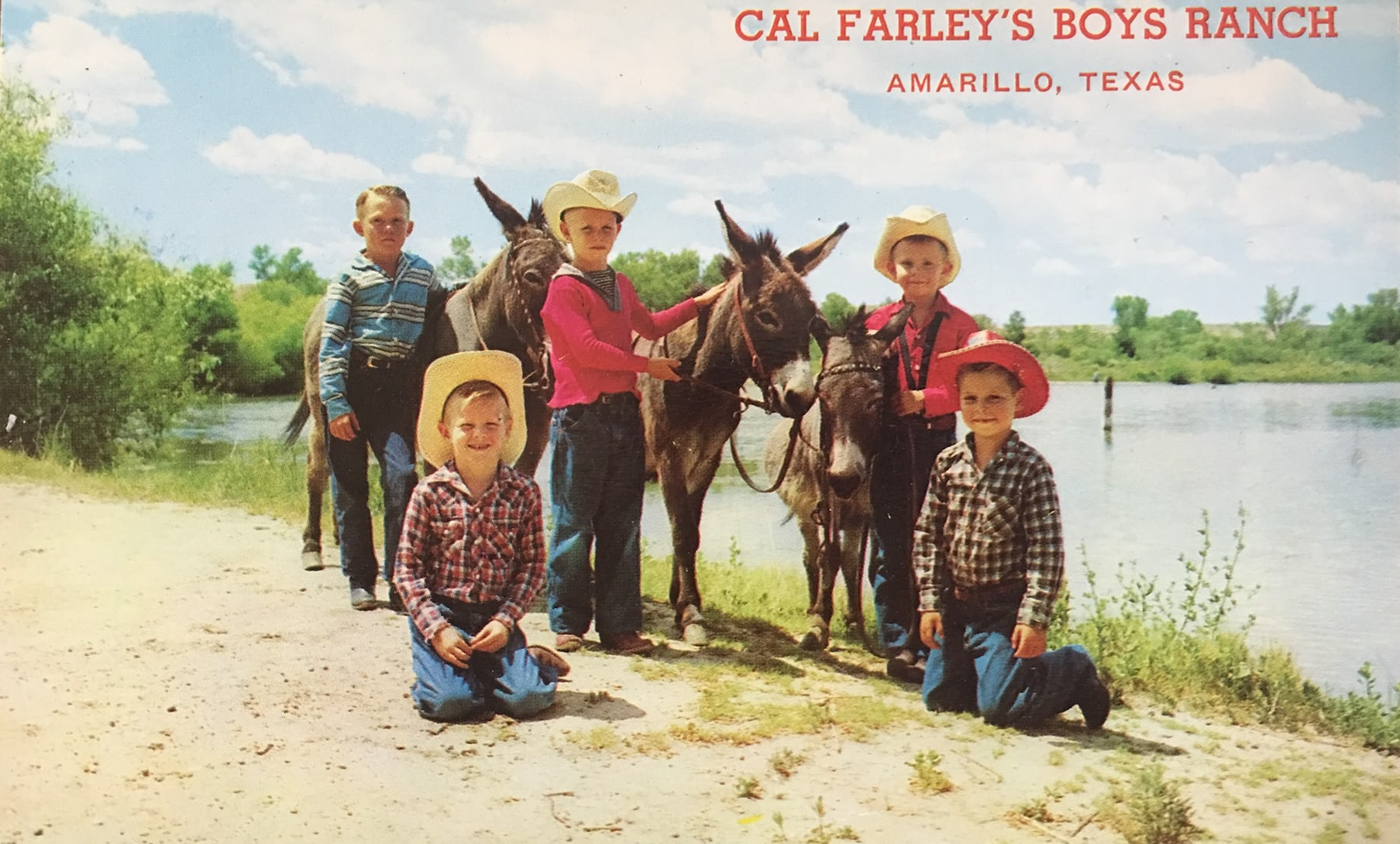 “A sense of safety is vital to a child’s ability to reach his or her full potential.”

The Child-Friendly Faith Project has been advocating for men and women who grew up at Cal Farley’s Boys Ranch from the 1950s through today. The privately funded, residential facility is located outside of Amarillo and houses boys whose parents or guardians can’t, or won’t, take care of them.

Child residents at Cal Farley’s suffered ongoing physical, sexual, and emotional abuse. After leaving the ranch, many lacked skills needed to find work. They have struggled with mental illness and addiction. Some have gotten into trouble with the law. Others have committed suicide.

Early this year, we reached out to Cal Farley’s CEO Dan Adams and asked that the institution fulfill requests made by the survivors, such as issuing a public apology, making restitution, and being truthful in its marketing. All of the requests were denied. Then a feature story in The Guardian exposed the abusive past of this nearly 80-year-old institution—a past that had been kept secret, until now.

“For a child, living with chaos and unpredictability often creates a feeling of powerlessness or a ‘learned helplessness.’” (Website of Cal Farley’s Boys Ranch)

How we got involved

If you grew up in Texas, particularly in North Texas, chances are good you know about Cal Farley’s Boys Ranch. For decades, there had been murmurings that the place was very strict. In fact, it wasn’t uncommon for children to be told, “If you don’t behave, you’ll be sent to Cal Farley’s.” But it wasn’t until I wrote a favorable blog post about the institution that I learned the harsh truth about its history.

The facility was started in 1939 by Cal Farley, a man who was a wrestler and tire salesman with no training in child development. Since then, the facility that bears his name has glorified its founder and the institution in its marketing material that seeks donations from the community.

What was really going on was systemic and severe physical and emotional abuse. While the ranch often promoted itself as a caring place, we now know that that was a smokescreen. To make matters worse, in 2017, Cal Farley’s dedicated a dorm building to its longtime employee, Lamont Waldrip, who retired in 1997. Those who lived at the ranch during Waldrip’s tenure, say he was one of the worst abusers. He also served as superintendent, overseeing the system that continued to brutalize boys.

“A child who lives in an emotional state of self-preservation and fear feels insignificant, even irrelevant.” (Website of Cal Farley’s Boys Ranch)

On December 20, The Guardian published a story that detailed the abuses suffered by boys who lived at the ranch from the 1960s and into the 1990s. It talked about the role of the Child-Friendly Faith Project to advocate for survivors, as well as the institution’s refusal to acknowledge that abuses occurred, apologize to survivors, or make restitution to them.

Click here to read The Guardian feature story, “The Texas boys were beaten, abused, raped. Now all they want is an apology.”

The Guardian story was the second-most viewed article on its site. Both survivor Steve Smith and I have conducted numerous media interviews. Then we got the news that, on the day the story broke, Cal Farley’s CEO Adams had apologized, both while being interviewed by a local TV station as well as in a press release. Unfortunately, the so-called “apology” was too little, too late.

In response, we issued a press release of our own that criticized the organization for hastily drafting a document that was disrespectful to survivors. 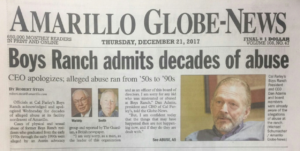 On December 21, the story made the Associated Press and was picked up by US News & World Report and many other outlets. On December 24, the Amarillo Globe-News published a scathing editorial demanding that Boys Ranch be transparent about its abuse prevention policies. “For example,” wrote the editors, “is there a way for children at Boys Ranch to report claims of abuse without facing repercussions?”

Click here to read the Dec. 23 editorial by the Amarillo Globe-News.

A prominent ex-rancher tells his story

That same day, the paper published an article that featured the story of a prominent individual. Bill Sarpalius, a former US Congressman who had also served in the Texas State House of Representatives, described a harrowing childhood at Cal Farley’s as a victim of sexual and physical abuse.

I was quoted in the article, stating that when well-known individuals acknowledge that they have been victims of abuse, it empowers survivors. I noted that many Cal Farley survivors, as children, tried to speak out and tell adults they were being abused or had witnessed abuse, only to be rejected, and sometimes punished. “We are grateful to Mr. Sarpalius for his courage and compassion.”

What the Amarillo community needs is to know that Boys Ranch is taking these allegations seriously, which means being transparent and open in what it did, what it does now and what it will do in the future. (Amarillo Globe-News editorial, Dec. 23, 2017)

Our goal has remained the same: to advocate for survivors of Cal Farley’s Boys Ranch. They have told us they want the institution to pay them monetary compensation (many don’t have the means to pay for counseling), remove the name of Lamont Waldrip from the newly constructed dorm building, and assure them and the public that children who currently reside there are safe.

Tweets by @chfriendlyfaith
I knew nothing about the world. I wanted so much more for my life than the church was ever going to allow me to have. I wanted to have friends. I wanted to work. I wanted to travel. I wanted to meet new people and experience new things. I was thrust into this world, this whole new world without really understanding anything about it, and I was forced to for a very long time to kind of figure it all out for myself. . . . We were taught that every thought or feeling that we had that wasn't aligned with the church's teachings was the devil speaking in our ear. So even after I left, for years I was filled with guilt and shame and terror. I was trapped inside this prison of my mind, like my body had left the church but huge portions of myself were still there. I realized then, I have to give myself a voice. I have to speak my thoughts and my feelings, and I have to share with the world what I’d been through. If I don’t, there’s really not any reason for me to go on.
—Brooke Arnold, Comedian
Some beliefs are like walled gardens. They encourage exclusiveness and the feeling of being especially privileged. Other beliefs are expansive and lead the way into wider and deeper sympathies. Some beliefs are like shadows, clouding children’s days with fears of unknown calamities. Other beliefs are like sunshine blessing children with the warmth of happiness. Some beliefs are divisive, separating the saved from the unsaved, friends from enemies. Other beliefs are bonds in a world community, where sincere differences beautify the pattern. Some beliefs are like blinders, shutting off the power to choose one’s own direction. Some beliefs are like gateways opening wide vistas for exploration. Some beliefs weaken a person’s selfhood. They blight the growth of resourcefulness. Other beliefs nurture self-confidence and enrich the feeling of personal worth. Some beliefs are rigid, like the body of death, impotent in a changing world. Other beliefs are pliable, like the young sapling, ever growing with the upward thrust of life.
—Sophia Lyon Fahs
I can only wonder how my life would have been different if there'd been a church around that had loved me for who God created me to be, instead of trying to change me from what it feared I represent.
—Benjamin, who wrote a journalist about his experiences being a a gay teen in his church
He told me that, because he was a man of God and he represented Christ in the flesh, it would be spiritual and natural for him to take care of me sexually. . . . But even though I felt that it was wrong, afterwards I thought, because [he] said he was a man of God and he brought up those things from the Bible, somehow, it was okay, or holy.
—Lindsay Tornambe, child sexual abuse survivor
No child can be enslaved without the consent of its mother. A mother fighting for her children is the most determined of foes. And a mother who believes that she and her children have no other destiny than slavery will tremblingly teach her babies the very values that the enslavers demand.
—Patricia Nell Warren