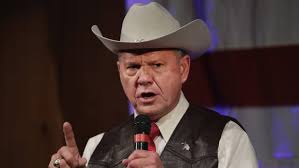 There’s a lot being said about Roy Moore, the 70-year-old Christian, gun-toting hothead of Alabama who recently won the US Senate primary and has been accused by numerous women who say Moore sexually abused them when they were in their teens and Moore was 32. The youngest alleged victim was 14.

What’s also making news is the fact that many people in Alabama have come to Moore’s defense. But not just those who agree with Moore (he claims the alleged victims are lying, it’s a political conspiracy, etc.). We’re also hearing from folks who say that, even if Moore did try to have sex with the girls, he did absolutely nothing wrong.

Add to that, Moore’s supporters in this Bible-belt state are using religion to justify that stance.

One ridiculed comment was made by Alabama’s state auditor, Jim Ziegler who called attention to the fact that, in the Bible, old guys commonly married underage girls. “Take Joseph and Mary,” said Ziegler. “Mary was a teenager and Joseph was an adult carpenter. They became parents of Jesus.”

Putting aside the fact that, in the story, Joseph didn’t groom and have sex with Mary to arrive at Jesus’ birth, it’s important to note just how eager these Christians are to use religious messaging to justify child sexual abuse.

At a political rally for Moore, North Carolina Evangelical Christian pastor Flip Benham openly condoned the former judge’s predilection for teen girls. “There is something about a purity of a young woman,” Benham said.

A recent poll shows that nearly 40 percent of Evangelical Christians say they’re more likely to vote for Roy Moore now than before the allegations came to light.

Of course, we’ve seen this play out in politics before. Evangelical Christians overwhelmingly voted for Donald Trump in the 2016 election even after the “Access Hollywood” tape surfaced. Christian leaders continue to support the president, often appearing in photos with their hands on the man whom numerous women have accused of sexually harassing and assaulting them.

Those Christians have overlooked Trump’s transgressions because supporting him serves their political agenda. In Alabama, however, religious conservatives who support Moore are trying to fulfill an agenda of a different kind—an agenda of power and sexual domination.

To put it another way, they’re supporting Moore because, in the patriarchal waters they swim in, normalizing child sexual abuse perpetuates a self-serving perception that boys and men are superior to, and should be able to control, girls and women. It’s one reason why men dating teenage girls isn’t uncommon in Evangelical Christian communities.

Ross Douthat writes in the New York Times that sexual predators “flourish among the godly and moralistic and traditional.” He points out that one such type of predator is “the rotten patriarch. This is the man who depends on the trappings of spiritual or familial authority to exploit the young and weak, shame them into silence, and pre-emptively discredit them.” Douthat goes on to say:

The rotten patriarch might be anyone from a handsy pastor or a lecherous pillar of the community to the leader of a sect or religious order. And in the defenses of Moore from various Alabama Republicans you can see the way conservative impulses protect this kind of figure — both in the suggestion that a man of his religious reputation should be trusted over his accusers, and in the risible invocation of Biblical examples to defend an older man’s lust for a 14-year-old girl.

And when you have a religious text that is revered—a text written when women and children were considered property—it’s no wonder that these “rotten patriarchs” wasted no time reaching for the Bible to justify Roy Moore’s alleged crimes. (The legal age of consent in Alabama is 16, as it was when Moore was alleged to have preyed on the teens.)

In her blog post, Valerie Tarico explains that Moore’s alleged abuses were, in fact, “perfectly biblical.” She points out that, in the Bible, young women are commonly given to older men, females are created for the benefit of males, rape is a violation (not against a woman but against her male owner), and female consent is not “a thing.”

Since this blog post was first published, more evidence about Moore’s predatory behavior has surfaced. The number of women who have come forward has grown. (As of November 16, it’s up to 9.) We’ve learned that Moore was banned from a mall for making a nuisance of himself trolling for teenage girls.

But even with these revelations, support for Moore among Evangelicaks has hardly wilted, even among women. As Alabama resident Pamela Hicks told the New York Times, Moore is “led by God, and that’s all that matters.”

“Roy Moore has made his choice,” writes Valerie Tarico. “You can call him disgusting or vile or sexist, but don’t use the word hypocrite. Moore is living the script.”