The question to ask in 2020: Who do we want to parent us? END_OF_DOCUMENT_TOKEN_TO_BE_REPLACED

What does your religion say about hitting children?

Written by Janet Heimlich on November 26, 2017 | No Comments 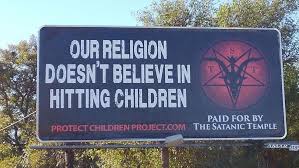 Where does your place of worship stand on the issue of corporal punishment of children? If you attend a conservative church, synagogue, or mosque, especially if it’s in ons of the southern “bible belt” states, chances are it supports hitting children as a form of discipline.

When the school district in Three Rivers, Texas, recently reinstated corporal punishment, one religious organization objected: the Satanic Temple. It put up billboards that said, “Never be hit in school again” and “Our religion doesn’t believe in hitting children.”

As the organization states on its website: “We believe in the inviolability of the human body and the right to personal sovereignty. Being hit, held against your will in isolation, or physically restrained clearly violate these fundamental tenets.”

To support students in schools that allow physical punishment, the Satanic Temple offers a pre-written letter that students sign and then give to their schools, informing them that “their deeply held beliefs do not allow for them to be hit in school, physically restrained, placed in solitary confinement, or deprived access to a bathroom.”

While not a conventional religion, the Satanic Temple’s billboard campaign is an example of how faith communities have sometimes dared to get involved in one of the most controversial childrearing issues.

To many, the practice of inflicting pain on children to teach them good behavior seems barbaric, yet corporal punishment is legal in every state. According to a 2016 Gallup poll, 64 percent of Americans approve of spanking children. and nineteen states allow corporal punishment to be used in schools.

Support of corporal punishment is on the decline, yet the US still stands alone when compared to other developed nations. According to the Global Initiative to End All Corporal Punishment of Children, 53 countries prohibit the practice, including in the home.

There is overwhelming evidence that physically punishing children is harmful and counter-productive. It can to lead to physical injury, increased aggression, antisocial behavior, and mental health problems. Students suffer too, as corporal punishment leads to higher drop-out rates, as well as increased rates of depression, substance abuse, and violent episodes later in life.

The Child-Friendly Faith Project has not found one study that shows physical punishment enhances child development, wellbeing, or self-esteem, which is why our Charter for Child-Friendly Faith upholds a child’s right to “not be subjected to teachings and rituals that cause pain.” There is a growing movement among child advocates and researchers to designate spanking as an “adverse childhood experience,” or ACE.

The good news is, many religious organizations, particularly those that are moderate or liberal, oppose the practice. In 2004, the United Methodist Church passed resolutions encouraging members to find alternative disciplinary techniques to corporal punishment and opposing the use of corporal punishment in schools and child-care facilities. The Presbyterian Church USA followed in 2012 with a similar declaration, and the United Church of Christ is considering to do the same. The Baha’i faith has long opposed corporal punishment and the Church of Jesus Christ of Latter-day Saints discourages its use.

Still, many Americans, particularly those in rural areas, strongly believe in using physical punishment in homes and schools. Some advocate for “a spat on the seat,” as one Baptist pastor put it, or hitting a child with an implement, such as a paddle or belt. Others make children eat hot sauce.

In 2012, a vice-principal in Springtown, Texas, paddled a 15-year-old girl so severely he left welts on her body. (The Satanic Temple put up a billboard in Springtown earlier this year in reaction to that case.)

One North Carolina school offers students who misbehave the option of being paddled or put on in-school suspension, which means they stay at school but are not allowed to go to class. When sophomore Allison Collins’ cell phone went off in class—she says it was the first time she’d ever been in trouble—she chose to be hit rather than miss out on class time.

As Collins told NPR, the principal called her father to get his permission to strike her. “And my dad was like, ‘Just paddle her.’ Because down here in the mountains, we do it the old-school way.”

If you know of a religious organization that promotes the use of physical punishment, and you’d like support in approaching the leadership to discuss this issue, please get in touch by emailing us at info@childfriendlyfaith.org.

Tweets by @chfriendlyfaith
We never really tell kids what [church] services are all about. All they're told is to be quiet and not talk for an hour. . . . There's the plight of the four-year-old who was in church on Sunday when the wine and wafers were passed out. His mother leaned over and told him that he was not old enough to comprehend the transubstantiation and that he was not allowed to partake in the Communion. Later, the collection plate came by and stopped dead in front of him. His mother again leaned over and tried to coax the nickel out of his clenched fist. He held firm and shouted, “If I can't eat, I won't pay.”
—Erma Bombeck
This is not a pleasant subject, especially for those of us who have deep, personal attachments to the Christian faith. But we dare not avoid the subject, for the abuse of children in the name of religion may well be the most significant reason for why they leave the faith when they are old enough to do so. We must ask ourselves: Who can blame them? Why should they not abandon the scene of their silent torment?
—Donald Capps, The Child's Song
I used to co-facilitate a group for parents who were trying to reunify with their children who had been removed by the state. I remember hearing the story of one mother whose 12-year-old daughter was removed from the home because she had been found walking the streets at 2am along with prostitutes and drug dealers. When her mother was telling the story in the group, she said, “The police brought her to my house and I said, ‘There is nothing I can do about this child. If it is God’s will that He test me with a spiteful child, then so be it. If it is God’s plan that she learn her lessons by getting raped, then I cannot do anything to prevent that from happening. Who am I to interfere with His will?’” In my head, I thought, “Are you serious?” To the group, however, I said, “I see that a lot of you are shaking your heads. What would you like to say to the mother right now?” Most of the group members said she was wrong, that God did not want little girls to get raped. Some members, however, stopped short and said that God’s will was a mysterious thing.
—Jonathan Singer, Host of the Social Work Podcast
We can’t blame the children for not telling us. They are powerless in every sphere. It was not that long ago when children were cautioned not to speak unless spoken to. Children don’t vote, to quote many a child advocate. To be sure, there are dedicated organizations . . . and individuals who push hard for children’s rights, but the US has a history of granting “rights” to adults at the expense of children.
—Marci A. Hamilton, God vs. the Gavel: The Perils of Extreme Religious Liberty
Forgiveness does not come from a position of powerlessness but from a place of empowerment and a degree of safety. . . . Justice, imperfect though it may be, makes forgiveness possible. The wound may heal even if the scar remains. In this healing, the body survives and may thrive, in spite of the scars and memories. Whether for a nation, a neighborhood, or an individual who has suffered trauma at the hands of an aggressor, justice is the key to healing and to a future.
—Rev. Dr. Marie M. Fortune