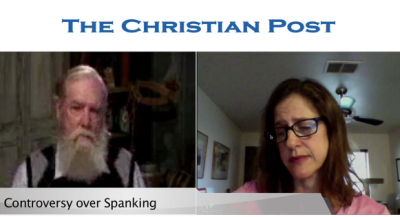 The media has pitted me against Michael Pearl on more than one occasion. The controversial, pro-spanking, Tennessee-based Christian preacher says children should not be disciplined but “trained” by hitting them with instruments such as tree branches or quarter-inch plumbing line. 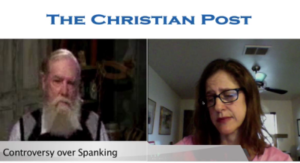 I have been vocal about my concerns that Pearl’s childrearing teachings are dangerous and have written extensively about them in Breaking Their Will and another blog post. Three children have been killed by adults who followed Pearl’s instructions on hitting children.

Pearl’s pro-spanking books have sold in the hundreds of thousands (largely to churches and homeschooling communities),  To back up his views, Pearl, who has had no training in child psychology, relies on quotes from the Old Testament, maintaining that God wants parents to spank their kids.

Pearl’s methods include making children who are challenged with potty training take cold baths, denying food to disobedient children. Pearl sees nothing wrong with applying his techniques to infants. Experts have denounced Pearl’s techniques as interfering with child development.

But just how does Michael Pearl view “child training” done right? I am going to show you, using his own words, based on an incident when Pearl gave spanking instruction directly to a parent whose child was not behaving in a way that was pleasing to Pearl.

In 2009, Pearl wrote an article on his website entitled “Child Training Marathon”. In the article, he delightedly recalls an incident that took place when he was spending time with a family after the parents had come to him for advice on how to discipline their kids. I describe this scenario in my book in a section called “Breaking Wills”.

Pearl recounts riding in the family’s car late at night when the family’s toddler son becomes upset. He was not sitting near his mother and wanted to sit in her lap. The preacher describes the boy as having “a tough hide that at times absolutely resisted all control. He would whine, and whine, and cry, and plead, and demand.” Then Pearl writes,

Mother was reaching for her baby when the father turned to me and asked, “What should I do?” Again I explained the principle: by allowing the child to dictate terms through his whining and crying, you are confirming his habit of whining and consenting to his technique of control. So I told the daddy to tell the boy that he would not be allowed to sit in his mother’s lap, and that he was to stop crying. Of course, according to former protocol, he intensified his crying to express the sincerity of his desires. . . . I told the father to stop the car and without recourse give him three to five licks with a switch. After doing so the child only screamed a louder protest. This is not the time to give in. After two or three minutes driving down the road listening to his background wails, I told the father to COMMAND the child to stop crying. He only cried more loudly.

The crying and stopping the car and spanking continue with Pearl’s approval. “This was repeated for about twenty miles down a lonesome highway at 11:00 on a winter night,” he writes. Meanwhile, no one heeds the concerns of the mother, whom Pearl describes as a woman who had been emotionally and physically abused as a child and who was, as he puts it, “a very ‘sensitive’ person”. She tells the men that the boy “doesn’t understand”. She had also remarked that he was hungry, sleepy, and cold. Pearl then writes:

I told the father to command the boy to stop crying immediately or he would again be spanked. The boy ignored him until Father took his foot off the gas, preparatory to stopping. In the midst of his crying, he understood the issues well enough to understand that the slowing of the car was a response to his crying. The family was relieved to have him stop and the father started to resume his drive.

But, according to Pearl, the child had not yet been properly trained. In his view, the boy’s behavior still required more spanking.

I said “No; you told him he was to stop crying immediately or you would spank him; he waited until you began stopping. He has not obeyed; he is just beginning to show confidence in your resolve. Spank him again and tell him that you will continue to stop and continue to spank until you get instant compliance.” He did. . . . This time, after the spanking, when Daddy gave his command, the boy dried it up like a paper towel. The parents had won, and the boy was the beneficiary.

The scenario that took place on that dark road late at night is a reminder that Pearl should not be entrusted to tell parents how to raise their kids. While he states that the parents “won”, it is clear that Pearl himself gained particular satisfaction. After all, he was able to get a father to repeatedly beat a two- to three-year-old boy until he subdued the child, one whom Pearl refers to as “a tough nut to break”.

To Pearl, and many parents who follow his teachings, the primary goal of parenting is not to support children by fulfilling their needs to feel safe and experience appropriate autonomy, but to control children. Never mind the fact that a plethora of studies show that corporal punishment and authoritarian parenting are often harmful. In the end, Pearl felt assured that he had, indeed, come upon the holy grail of childrearing.

Fortunately, Pearl’s grip on parents is slipping. National exposure of Pearl’s teachings and of the abuses that have followed are leading many Americans to abhor the preacher from Tennessee. Following the publication of a New York Times article on Pearl, an online petition urging Amazon to stop selling Pearl’s book attracted thousands of signatures. One day I was contacted by the attorney of a concerned individual who had bought the “.com” version of Pearl’s website (www.nogreaterjoy.com) and asked my permission to route it to one of my posts about him to which I said yes.

Of course, parents who buy into the idea that Pearl has the ear of God and who are obsessed with controlling their children will continue to follow his methods. Some will continue to see Pearl’s teachings as a license to hurt, and even to kill. We should not be surprised if we hear that another child has been “trained” to death. Yet, at the same time, many more Americans realize that Pearl’s teachings are harmful and pose a risk to untold numbers of children throughout the United States and elsewhere.

Child-rearing teachings of a Tennessee evangelist
Previous
Next