Written by Janet Heimlich on February 25, 2013 | No Comments 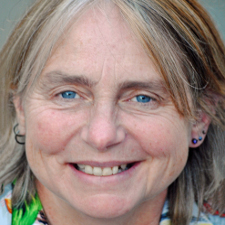 Liz Heywood grew up in the Christian Science Church outside of Boston, the church’s headquarters. When she was a teenager, she developed a serious bone infection in her knee. Her family, members of the Christian Science Church, arranged for her to receive faith healing. No one took her to see a doctor, even as she suffered intense pain and was unable to walk. After being bedridden for a year, her leg was deformed and, eventually, had to be amputated above the knee. This article is the first of a series that features survivors of religious child maltreatment who have not only pursued their own psychological healing, but have also chosen to speak out to protect children who currently suffer abuse and neglect in the name of religion. Liz’s blog and website can be found here.

I imagine that when you were growing up in the Christian Science Church, everything seemed normal, including the faith healing rituals and the peculiar way the church perceives illness. That is, that illness is not real but, rather, an illusion of the mind. Did you believe its teachings as a child and perhaps worship Mary Baker Eddy?

I was very thoroughly indoctrinated as a kid. I was born at home and only had the minimum school vaccinations required under the religious exemption. My parents each had a sister who had a so-called “miraculous healing” in childhood after their mothers converted to Christian Science. We lived within twenty miles of the Christian Science “Mother Church” in Boston. Read More