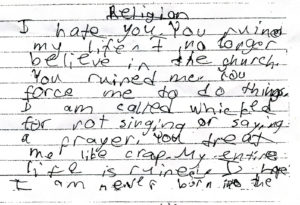 Tweets by @chfriendlyfaith
I had to make a decision between God and my kids, and I knew . . . that if I chose my kids, I didn’t have a prayer. But I didn’t care anymore. So we lost everything in one day.
—Sara Poisson, mother who left the Jehovah’s Witnesses as the only way to protect her children from her abusive husband
We never really tell kids what [church] services are all about. All they're told is to be quiet and not talk for an hour. . . . There's the plight of the four-year-old who was in church on Sunday when the wine and wafers were passed out. His mother leaned over and told him that he was not old enough to comprehend the transubstantiation and that he was not allowed to partake in the Communion. Later, the collection plate came by and stopped dead in front of him. His mother again leaned over and tried to coax the nickel out of his clenched fist. He held firm and shouted, “If I can't eat, I won't pay.”
—Erma Bombeck
The wolf will live with the lamb. The leopard will lie down with the goat. The calf and the lion and the yearling together, and a little child will lead them. (Isaiah 11:6)
Forgiveness does not come from a position of powerlessness but from a place of empowerment and a degree of safety. . . . Justice, imperfect though it may be, makes forgiveness possible. The wound may heal even if the scar remains. In this healing, the body survives and may thrive, in spite of the scars and memories. Whether for a nation, a neighborhood, or an individual who has suffered trauma at the hands of an aggressor, justice is the key to healing and to a future.
—Rev. Dr. Marie M. Fortune
I never realized that a child is capable of remembering so well and of waiting so patiently.
—Janusz Korczak