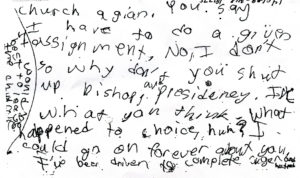 Tweets by @chfriendlyfaith
You make each day a special day. You know how, by just your being you. There's only one person in this whole world like you. And people can like you exactly as you are.
—Fred Rogers, speaking to his young audience on the TV show "Mr. Rogers' Neighborhood"
There is no greater contribution than to help the weak. There is no greater satisfaction than to do it well.
—Walter P. Reuther
This is not a pleasant subject, especially for those of us who have deep, personal attachments to the Christian faith. But we dare not avoid the subject, for the abuse of children in the name of religion may well be the most significant reason for why they leave the faith when they are old enough to do so. We must ask ourselves: Who can blame them? Why should they not abandon the scene of their silent torment?
—Donald Capps, The Child's Song
Everyone has the right to believe what they want to believe, and that right is absolute. But the right to act on one’s religious beliefs is not absolute. . . . .I don’t think that there’s any room under the law for endangering the life of a child. Or under the First Amendment. These laws are not supposed to extend that far.”
— Charles Haynes, Director of the Religious Freedom Center of the Newseum Institute
I can only wonder how my life would have been different if there'd been a church around that had loved me for who God created me to be, instead of trying to change me from what it feared I represent.
—Benjamin, who wrote a journalist about his experiences being a a gay teen in his church