Do culture and religion matter in the Adrian Peterson case? 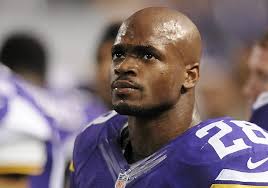 While the media seems largely focused on the fact that the Minnesota Vikings finally decided to bench its star running back, a more important—and politically incorrect—question needs to be asked:

Did Adrian Peterson’s religious beliefs and cultural background as an African American contribute to him beating and injuring his son?

Many details about the case have been well publicized and have not been denied by Peterson: Last spring, he “disciplined” his four-year-old son at his Houston home by stuffing leaves in his mouth and hitting him repeatedly with the branch of a tree or “switch.” The boy was also reportedly beaten with a belt. The “whoopings,” as Peterson called them, resulted in the boy sustaining lacerations, bruises, and welts on his legs, arms, buttocks, and genitals. Upon questioning, the child told his mother that Peterson “likes belts and switches and has a whooping room.”

After intense public pressure, the cancellation of a major NFL sponsor, apparent threats by other companies to cancel sponsorship, and the news that Peterson had been accused of abusing another son in 2013 (Peterson was not charged in that case), the Vikings dramatically changed course. Initially, after Peterson was indicted on child abuse charges, the Vikings had him sit out one game and then allowed him to rejoin the team. After the public outcry, officials barred him from all team activities. Some predict he will never again wear a Vikings jersey.

Now, statistics on the use of corporal punishment in conservative Christian households and those in the African American community are raising questions as to whether Peterson’s religious beliefs and cultural background fueled his ideology about the need to control his son’s behavior in this way and, ultimately, to injure him.

I’m not aware of any studies that show that children in one faith or racial group are more at risk for abuse than others, but there is reason to believe that children who are physically punished are more at risk for being physically abused than children who are not physically punished. Studies show that a vast majority of child abuse is delivered in the midst of adults using corporal punishment. Furthermore, children are more likely to be injured when parents use corporal punishment frequently or use implements to spank children.[1]

Americans overall have been spanking less and less. The percentage of parents who favor corporal punishment has dropped from 84 percent in 1986 to about 70 percent in 2012. Many Christians choose not to spank their kids, pointing out that, according to the Bible, Jesus never advocated that children should be taught respect through hitting. Some Christian leaders have changed their views and now oppose spanking.

On the other hand, conservative Christians tend to believe that their religion requires them to spank. Many justify this choice by referencing numerous passages in the Book of Proverbs that condone using “the rod” to discipline children. Add to that, some Christians believe that corporal punishment may be necessary to correct children’s inherent “sinfulness.”

Days after Peterson’s indictment, a psychologist and minister with the conservative Christian organization Focus on the Family wrote an op-ed in Time magazine in which he expressed this sentiment:

Unfortunately, each of us enters this world with desires that are selfish, unkind, and harmful to others and ourselves. Spanking, then, can be one effective discipline option among several in a parents’ tool chest as they seek to steer their children away from negative behaviors and guide them toward ultimately becoming responsible, healthy, happy adults.

The 29-year-old Peterson is a deeply religious Christian. His Twitter feed is peppered with religious proclamations and snapshots of Bible verses. The conservative Christian 700 Club has featured Peterson on its website. Despite the fact that another of Peterson’s sons was allegedly beaten to death when the boy was two years old, Peterson seems to wholeheartedly believe that children should be disciplined using physical punishment.

On September 15, Peterson tweeted: “Deep in my heart I have always believed I could have been one of those kids that was lost in the streets without the discipline instilled in me by my parents and others relatives.”

Generally speaking, African Americans also rely heavily on the use of corporal punishment. One study that looked at the childrearing of kindergartners shows that 89 percent of black parents spanked compared to 79 percent of white parents. According to a New York Times op-ed written by Georgetown University Sociology Professor and author Michael E. Dyson, African Americans’ wide acceptance of physical punishment is inherited from the days of slavery.

The lash of the plantation overseer fell heavily on children to whip them into fear of white authority. Terror in the field often gave way to parents beating black children in the shack, or at times in the presence of the slave owner in forced cooperation to break a rebellious child’s spirit. Black parents beat their children to keep them from misbehaving in the eyes of whites who had the power to send black youth to their deaths for the slightest offense.

Dyson goes on to say, “If beating children began, paradoxically, as a violent preventive of even greater violence, it was enthusiastically embraced in black culture, especially when God was recruited. As an ordained Baptist minister with a doctorate in religion, I have heard all sorts of religious excuses for whippings.”

This association might explain why a number of African American athletes have come to Peterson’s defense, often stating that the kind of beating Peterson gave his son is not all that uncommon among blacks. On a New York radio broadcast, Lions running back Reggie Bush said he and many of his friends were punished in the same way as Peterson chose to do with his son and that he would “harshly” punish his own one-year-old daughter if need be.

In an interview on NFL Today, NBA Hall-of-Famer Charles Barkley said corporal punishment is a way of life among those in black, southern culture. “Whipping, we do that all the time. Every black parent in the South is going to be in jail under [Peterson’s] circumstances,” Barkley stated.

Following his indictment, Peterson showed remorse for injuring his child. On September 15, Peterson tweeted that he had disciplined his son the way he himself had been disciplined as a child.

It’s safe to say the conversation about the morality of corporal punishment is not over. Sadly, it took a high-profile case of severe child abuse to begin a meaningful public discussion on this topic. But in addition to debating the pros and cons of physical punishment, we should also examine the religious and cultural roots of spanking among conservative Christians and in the African American community, as well as all Americans. If we don’t, we have little hope of protecting children such as the son of Adrian Peterson.

This article was originally published on ReligiousChildMaltreatment.com.